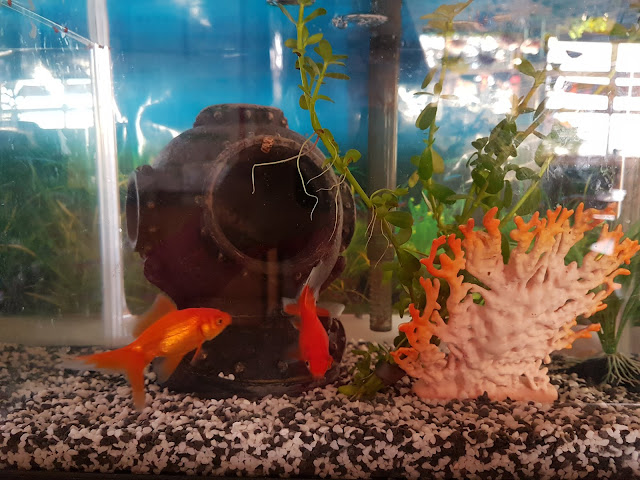 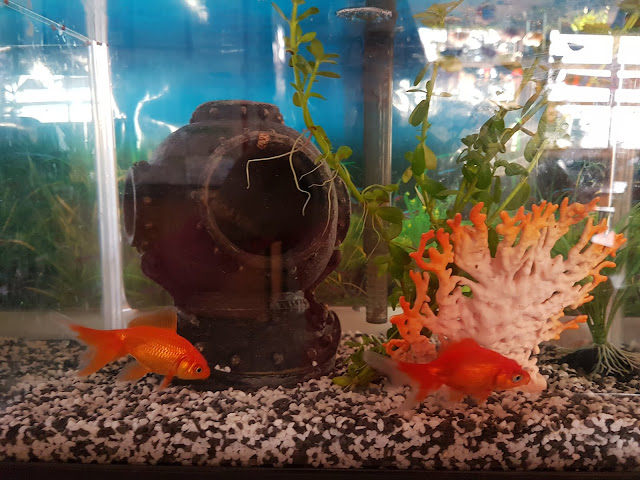 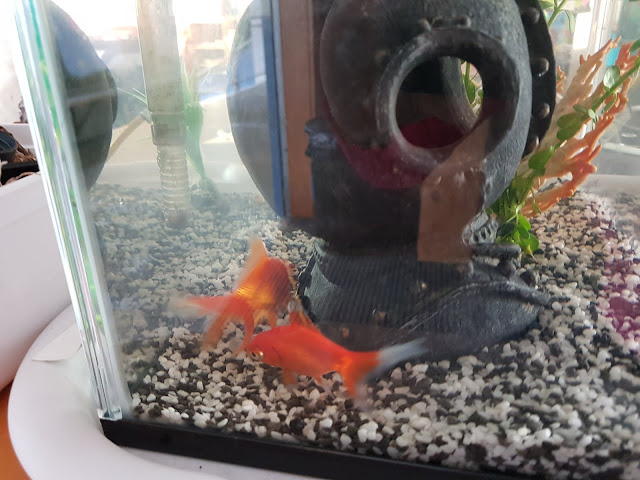 The new goldfish are so shiny and speedy
that they are making me dizzy.  Room 5
got the fish on Thursday and their names
are Goldie and Flash. They are so good
and Flash goes so fast!  I see him swim
like lightning and he has  white on his tail.
Both of the fish are orange and the fish
like their home.


I don’t know if they are girls or boys and
I think Goldie is a boy because I am a
boy.

Goldfish have scales on their sides to breathe.
They open their mouths when they are swimming.
Goldfish like swimming around.

In Room 5 we have two goldfish. Their names are Goldie and
Flash. Goldie is bigger and slower, Flash is smaller and quick
in the water. Goldfish like eating fish food.

22/05 Jesse Our Sweet And Magnificent Goldfish
Finally! Mrs Shewring has brought two goldfish into room 5.
We had a name voting and some people got to say a name for
our goldfish. I chose Goldie and so their names are Goldie and
Flash. Melissa feeds the fish every morning and I love our
goldfish! We do not know if they are a boy or a girl.  They are so
lucky to have a nice tank! It looks like the sea.

Jessie
I am happy because we have two goldfish in our class and their names are Goldie and Flash. Melissa feeds them in the morning. They are orange and Flash is the fastest. He is quicker than Goldie.  In the tank there is a water snail and some water weeds. The goldfish like to play hide and seek. At the back of the tank there is a picture. I like these new goldfish!

Claire
Guess what we got last Thursday? We got two cute goldfish! Their names are Goldie and Flash. Goldie is the big goldfish and Flash is the little one. He is a fast swimmer but Goldie is a little bit slow. Then little Flash flashes his tail. His gills, mouth, yes, scales and fins are shining like orange firecrackers and his eyes are like little black balls. Goldie likes swimming, I guess. I think Flash likes eating goldfish food. Goldie's eyes are just the same. I love our new goldfish!

Yuvraj
In Room 5 two amazing creatures appeared! Their names are Goldie and Flash. The big one is called Goldie and the smaller one is called Flash. In their tank there is a filter and a water-snail and a diving helmet. I like our goldfish.

Armani
We have new goldfish. One is named Goldie and the other one is Flash. They love playing together. They have half way circles on their bodies. They make bubbles and they have big eyes. Flash swims fast. They are good friends. Flash is little and Goldie is big. There is a water snail in the tank. It is a square tank and I like the fish.